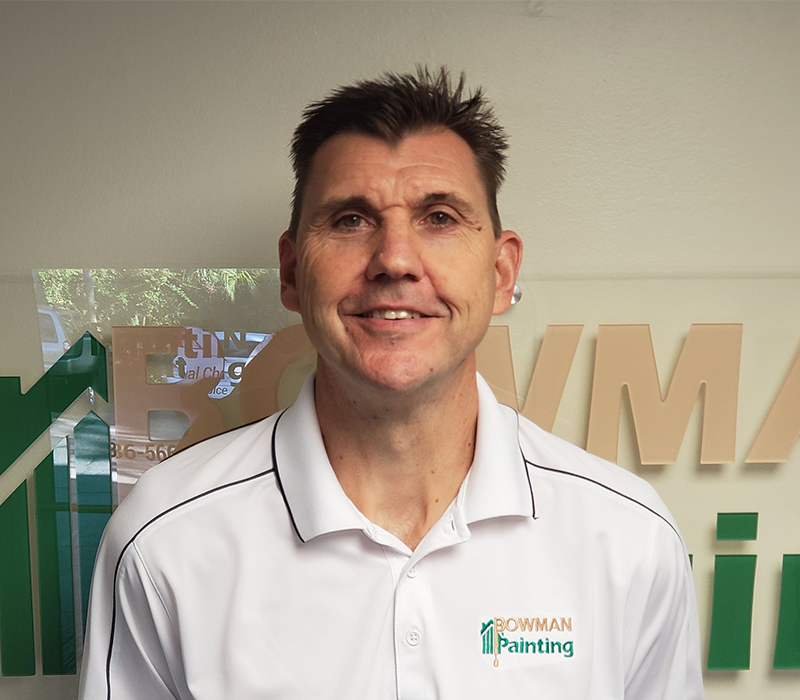 Scott founded Bowman Painting in 2006 after spending 10 years in the public relations industry. A native of California, Bowman graduated from Westmont College in Santa Barbara, Calif., in 1995 with a B.A. degree in Communications. After one year at Cal State University Dominguez Hills, Bowman spent the next four years (1996-2000) as the Sports Information Director at Concordia University in Irvine, Calif.

Bowman moved to Florida in August of 2000 after accepting a job in media relations with NASCAR. Bowman spent the next five years promoting NASCAR and its drivers and teams while touring the racing circuit. During his time working in media relations, he won multiple awards for publications.

Always with an eye for detail, Bowman began his own business in new construction doing painting and carpentry for Nielsen Construction, a home builder in Daytona Beach, Fla. With the aid of a strong work ethic, a personable nature and a desire to service the client, Bowman has since expanded his business into residential repaints and all phases of commercial painting.

Married in 1997 to Lynette K. Sosa, the Bowman’s have two sons, Kyle and Cole. Lynette is an administrator at Riverbend Academy and Marketing Coordinator for Bowman Painting. Bowman is active in membership at Riverbend Community Church and enjoys playing sports and coaching basketball in his spare time.

Robert comes to Bowman Painting with 10 years of painting experience. Born and raised in the western suburbs of Chicago, IL, he started working for RSR Construction as a laborer before working his way up to painter. When his family moved to Daytona Beach, he decided to join them. Outside of work, he enjoys golf, site seeing, and taking trips. He also spends a lot of time with family and friends. 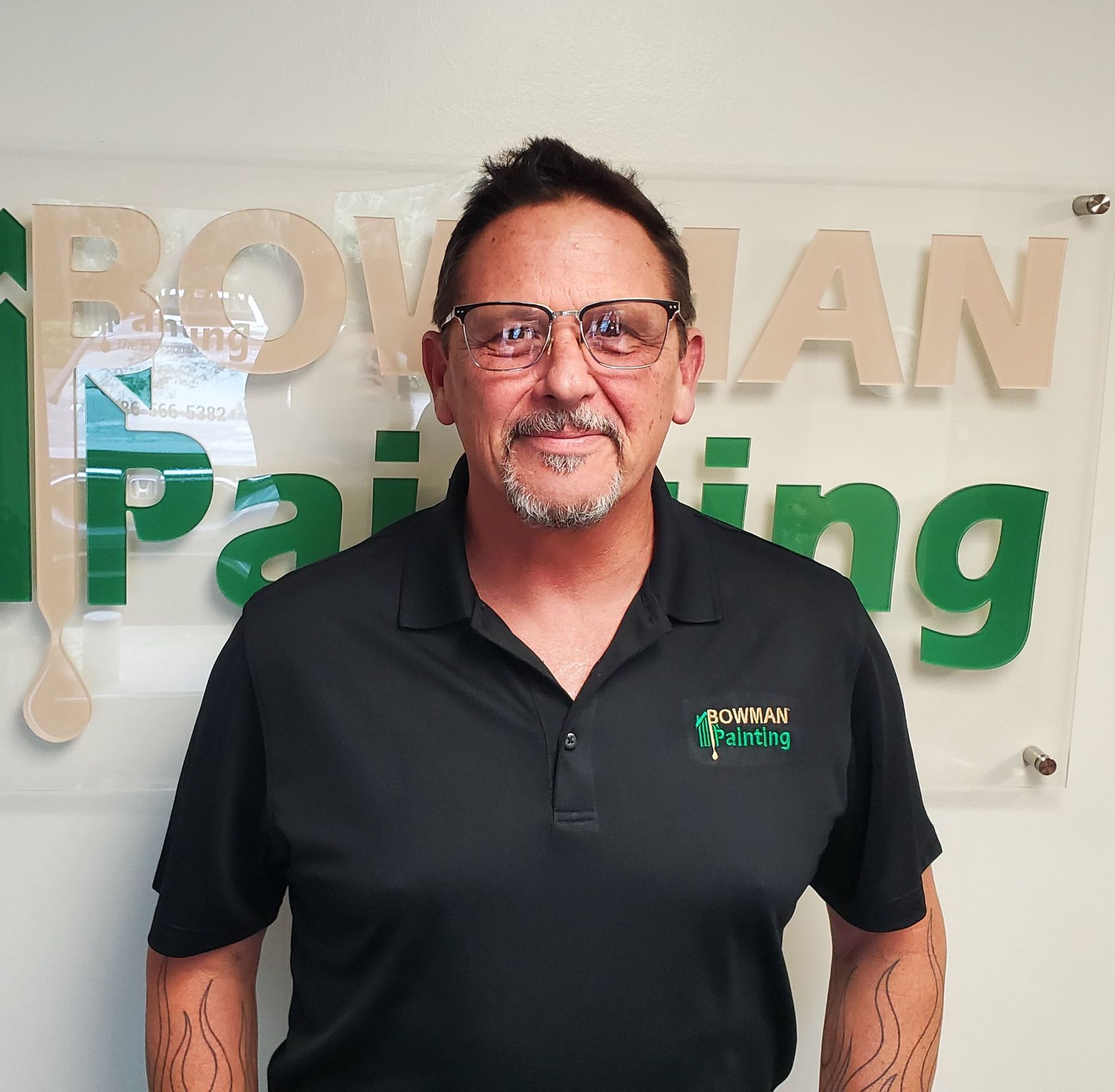 Ron comes to Bowman Painting after relocating from Pennsylvania to Florida. Visiting since 2005, in August of 2022 his dream of living in Florida full-time came true! Outside of work, he enjoys spending time with his family, fishing, and other outside activities. He also enjoys riding motorcycles. He is married and has three adult children. He also has dogs: Sophia, a German Shepherd, and Stella, a Lab-Pt mix. Ron has already displayed a great work ethic and not only appreciates having a good time but meeting new people. 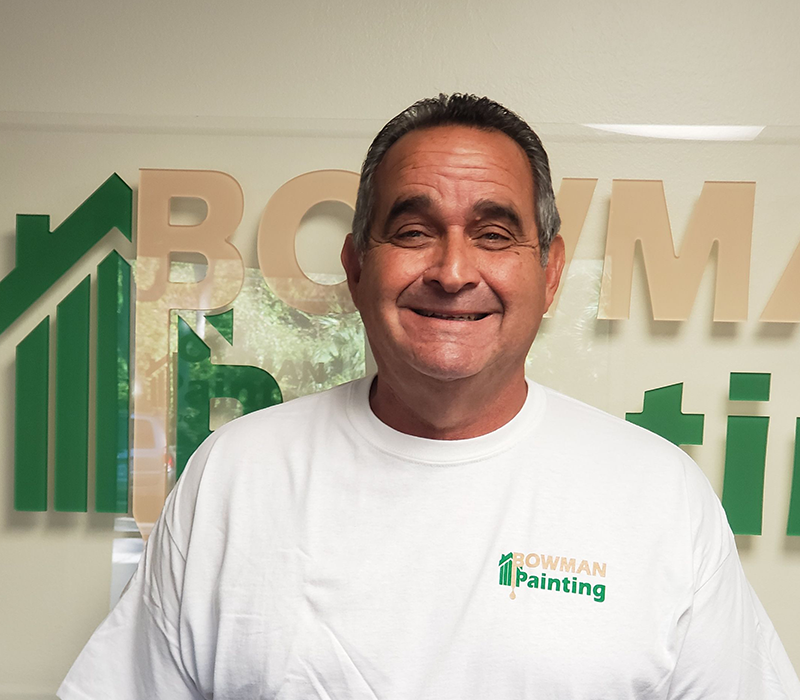 Julio learned to paint from his father-in-law. He has been painting for the past six years and has been with Bowman Painting since 2016. Julio was born in Cuba but left in 1959 and found his way to Key West. He is blessed to have 3 children and a granddaughter. Julio likes to kayak, play golf, and taking walks on the beach. He is also very active in his church. 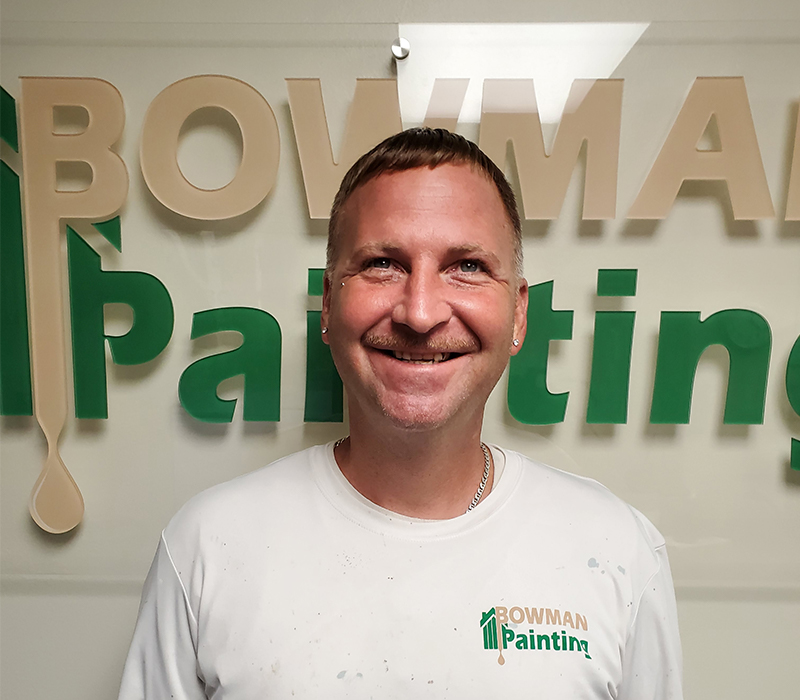 Having learned how to paint from his father and grandfather, Joshua is a third-generation painter with 21 years of experience. Born and raised in Sanford, Florida, the native Floridian enjoys surfing, fishing and working out. He has one daughter. 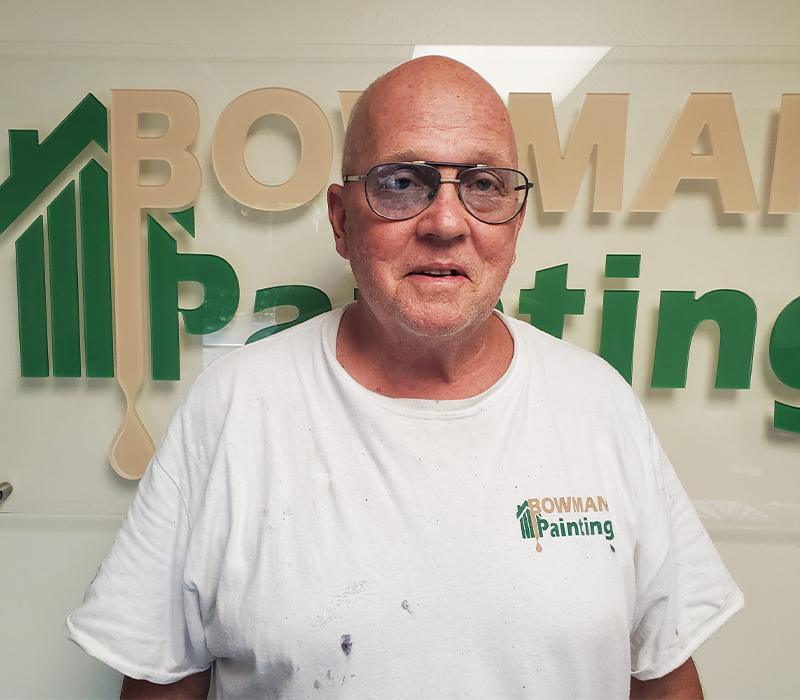 With 50 years’ experience, Jimmy joins the Bowman Painting team! He used working with old times and some trial and error over the years. He was born and raised in Pennsylvania but has always loved Florida. Outside of painting, he enjoys fishing and searching for treasure at flea markets and tag sales. He also likes to read. He is widowed and has two children. 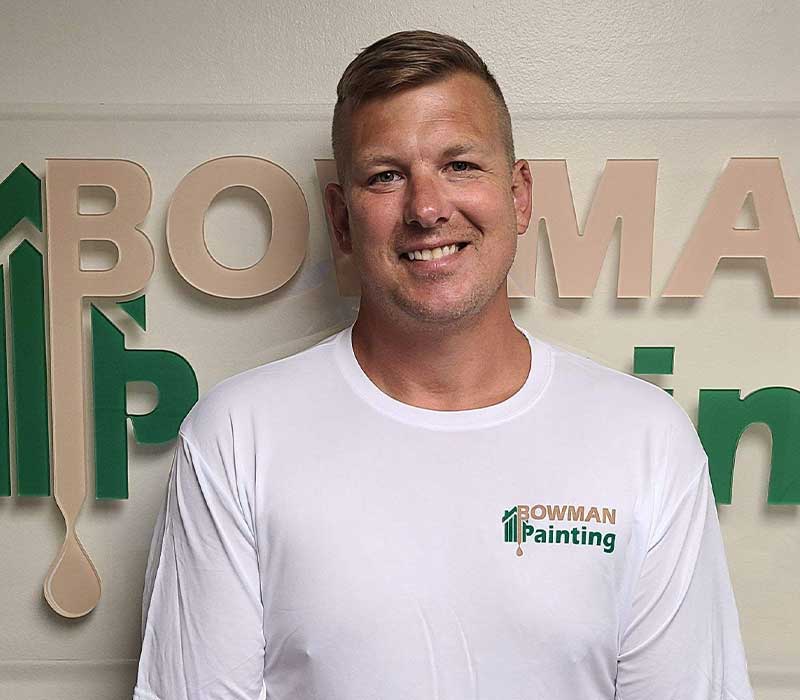 Tim joins the Bowman Painting team with 25 years of painting experience. He learned the trade from his dad and uncles. Tim was born and raised in Grand Rapids, Michigan and recently relocated to Florida to chase freedom. Outside of work, he likes watching sports, playing baseball, basketball, and football. He is also involved in church activities and working on his house. He is married and has one child. 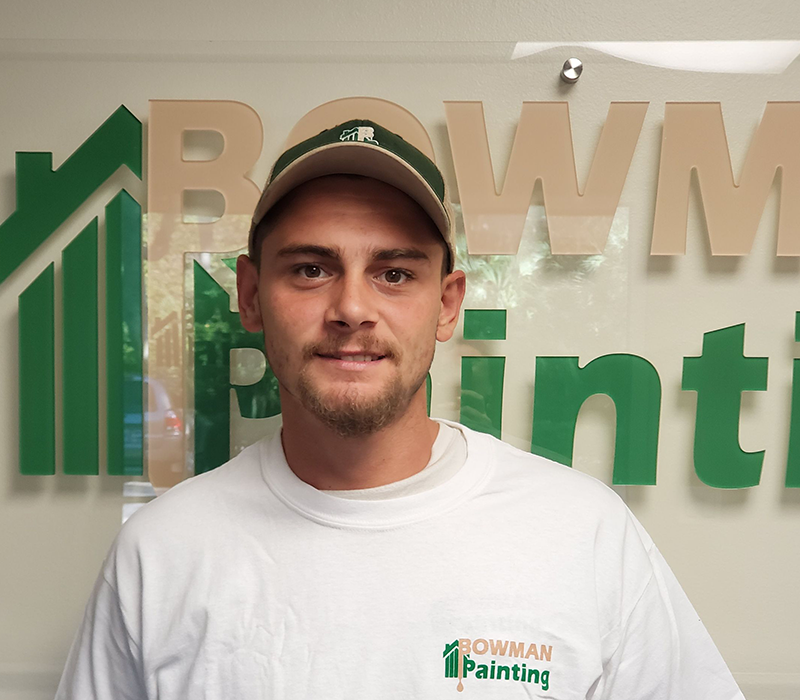 Joseph learned to paint from his dad and has been painting for five years. Raised in Debary, Florida, he enjoys hunting and fishing. In addition to working with his hands, Joseph welded and fabricated his own airboat. 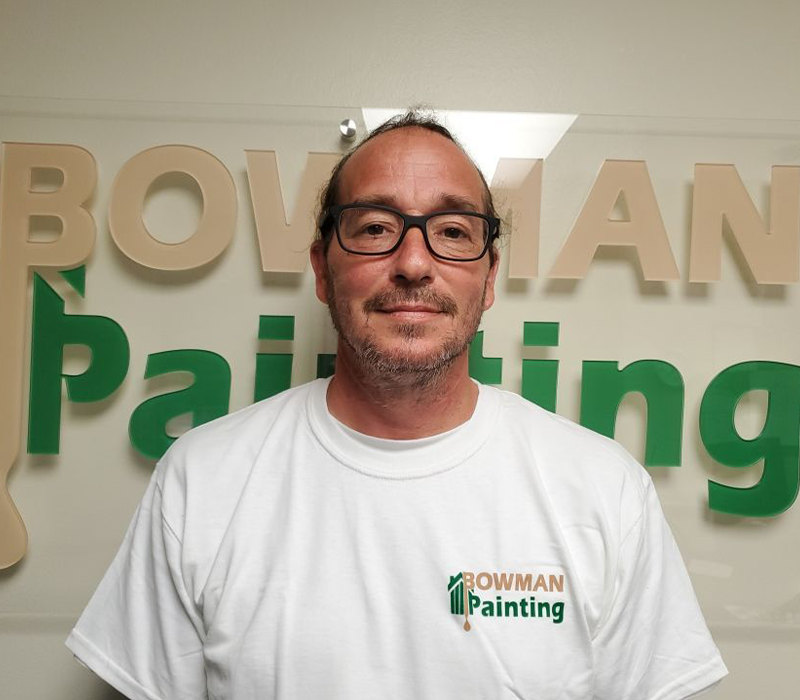 Wayne joins Bowman Painting with 30 years of painting experience. Originally from Maine, he learned to paint during school breaks. He and his wife have also lived in Georgia and Tennessee prior to moving to Florida. Together, they have two fur-pups. 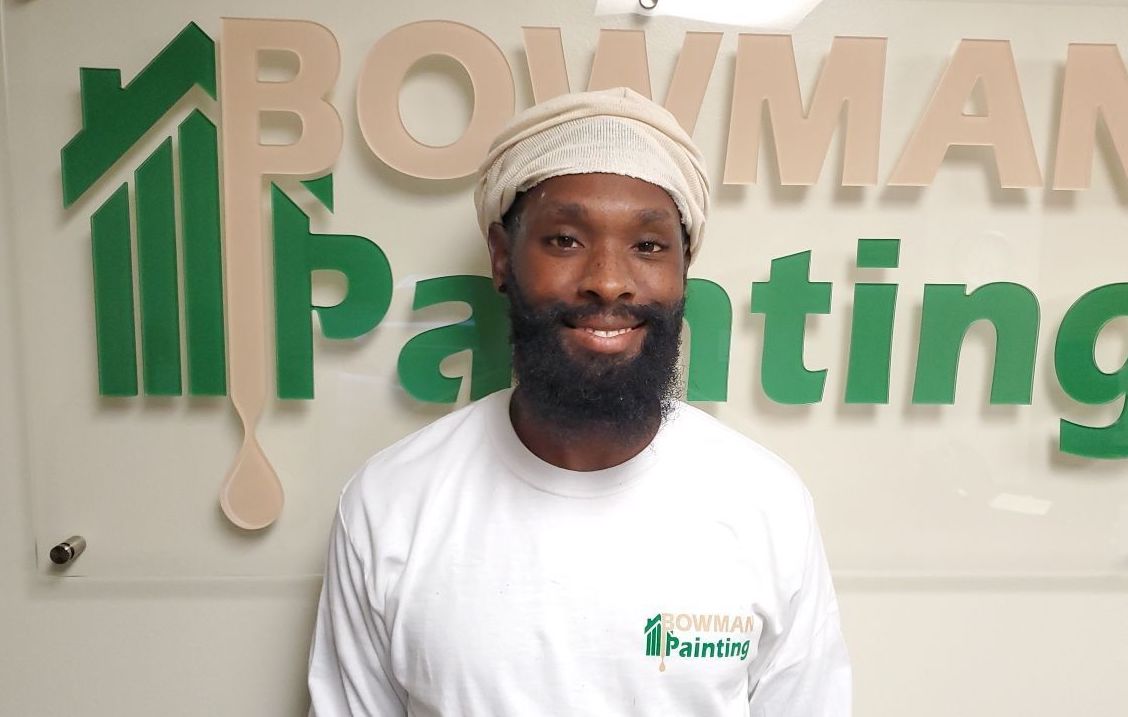 DeVante joins the Bowman Painting team with five years of painting experience. Raised in Asbury Park, New Jersey, he moved to Florida in 2010 to better himself and his work life. Outside of work, he enjoys basketball, video games, and reading sports magazines. He has a four-year-old son. 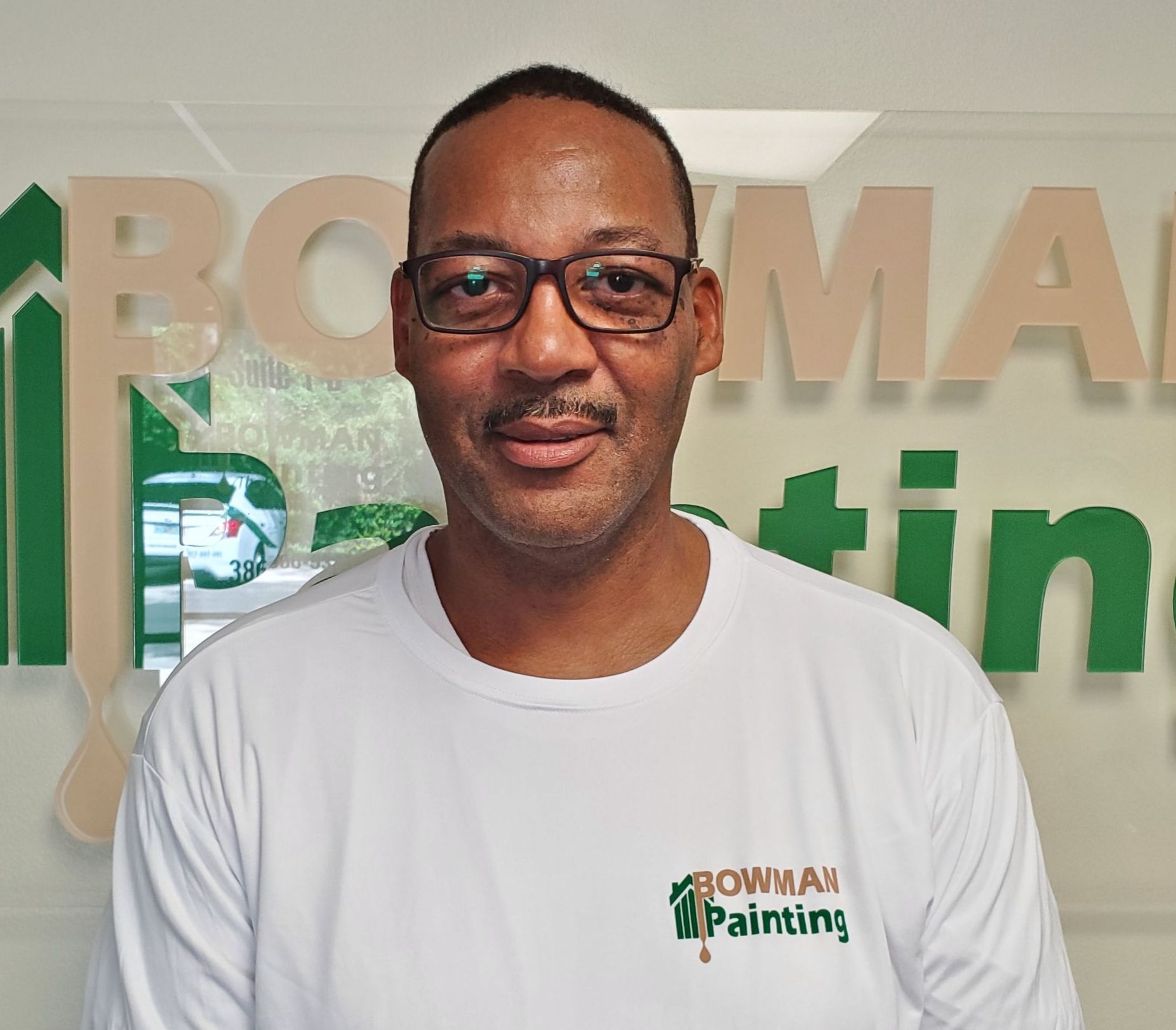 Calvin comes to Bowman Painting with over 25 years of experience. He learned the trade from different paint contractors over the years. Originally from Port St. Joe, he enjoys basketball outside of work. He is married and has three children, Olivia, Calvin, and Erik. 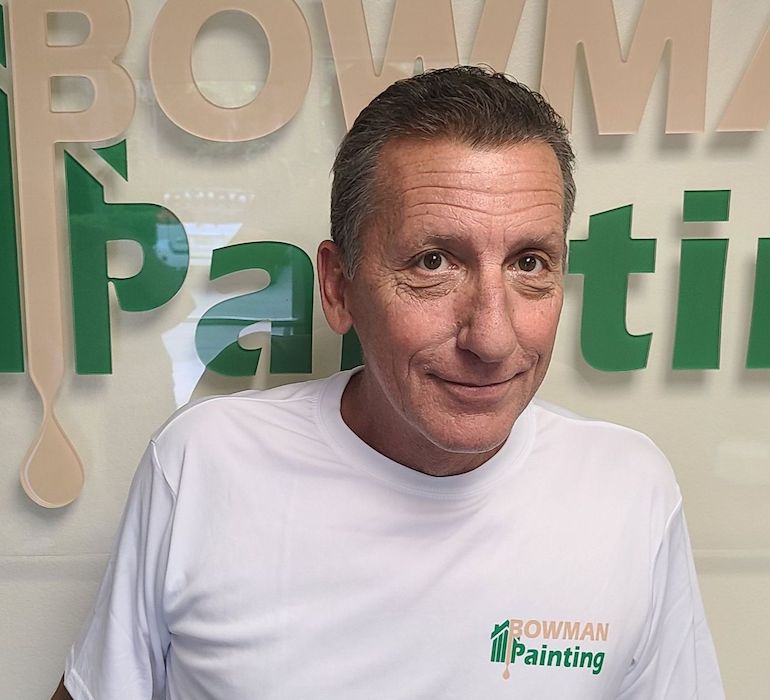 Glen comes to Bowman Painting, having originally learned on the job and, now has 34 years of experience in the painting trade.  Glen is originally from Middlesex, New Jersey and moved to Florida for more affordable housing. Outside of work he enjoys fishing and fixing things. He also has three children.

Howard comes to Bowman Painting with 30 years of experience within the painting trade. He learned how to paint in his early 20s. Before living in Florida, he was raised in Minnesota. Outside of work, he enjoys fishing and spending time with his lady. Howard has three children.
Close 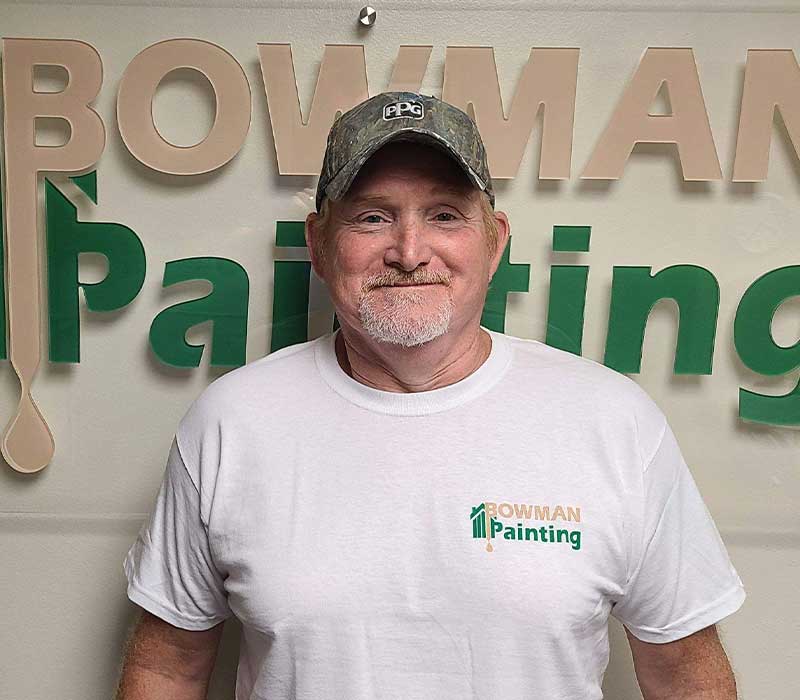 Steven comes to Bowman Painting with 30 years of painting experience and plastering. From upstate New York, Wilson drove to Florida in July of 2021 to relocate. Outside of work, he likes to ride motorcycles and drumming. He also has two children.

Antonio comes to Bowman Painting with 20 years of painting experience! A New York native, he relocated to Florida seven years ago. He enjoys baseball and football. He is very handy and likes doing various home improvements outside of work.

With over 30 years of experience, Arthur has joined the Bowman Painting team of painters. He learned the trade from the union and his father-in-law. A San Jose native, he moved from California to Denver, Colorado. He and his wife moved to Florida to retire. Outside of work, he likes to ride his bike and play with his dogs. He is married to Amelle and has three children: Monique, Cecilia, and Dolores.

Bill joins us with 25 years of painting experience after an early career as a chef. He grew up in upstate New York and relocated to Florida in 2013. Outside of work, he enjoys spending time with his grandchildren. His favorite sports teams include the Yankees, Patriots, and Lakers. He is married with two children and four grandchildren.

Cody comes to Bowman Painting with three years of painting experience. He learned the trade through general handy man work. A Florida native, he likes to write music and craft outside of work.

Michael joins Bowman Painting with five years of experience. A Florida native, he enjoys fishing and hunting. He also likes mechanical work. He is engaged and has two children. He is a self-described Jack of all trades, master of none. 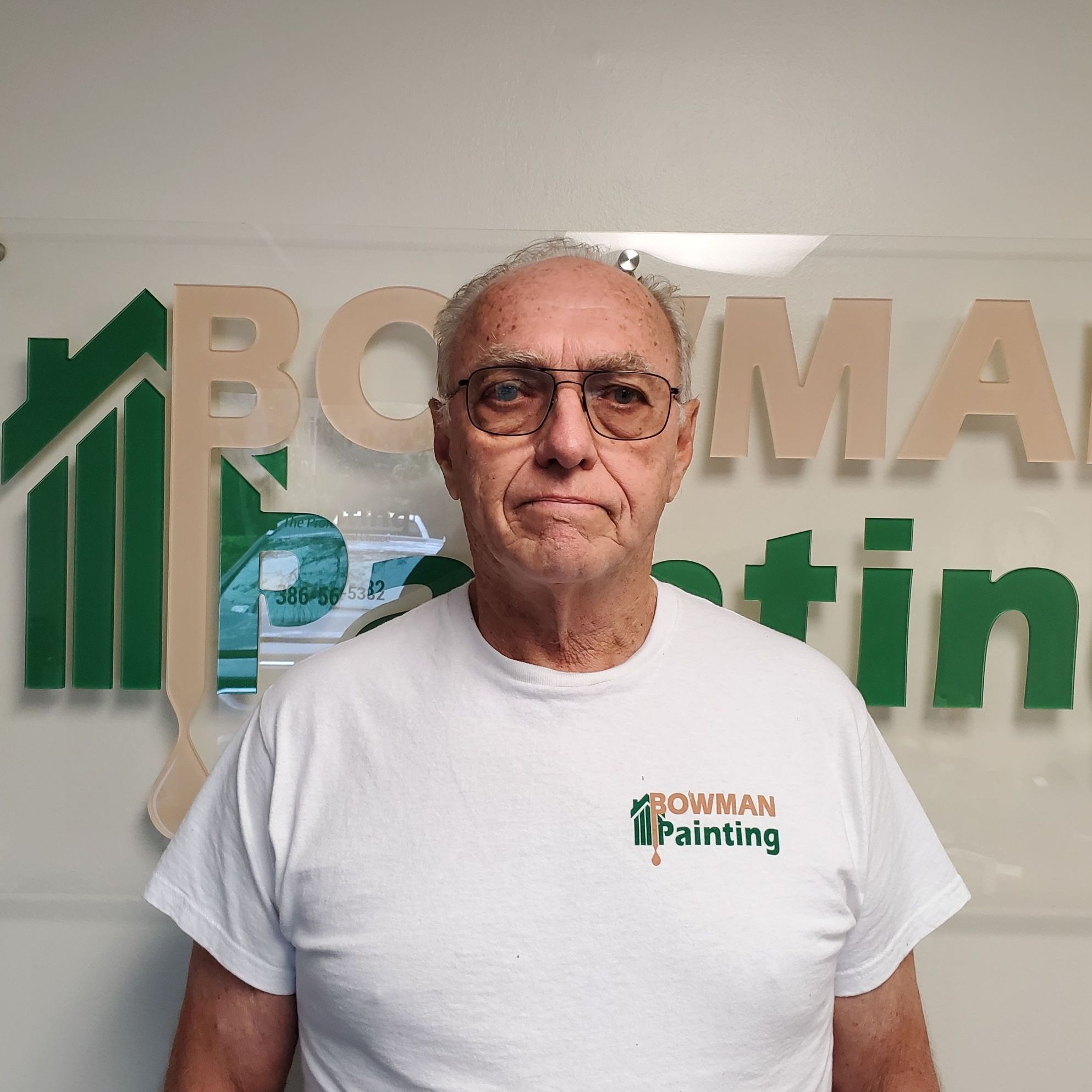 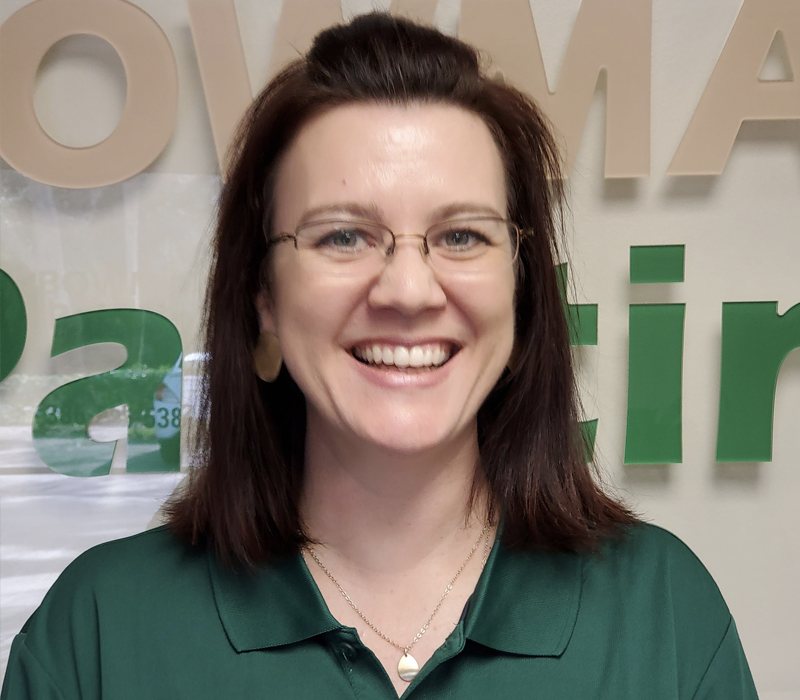 A lifetime educator, Lynette joins the family business assisting with Marketing and special projects. She enjoys serving in youth ministry at their church and shopping. Some of her greatest joys are watching her two boys playing basketball and spending time at home with the two family dogs, Bailey Hoops and Sebastian. 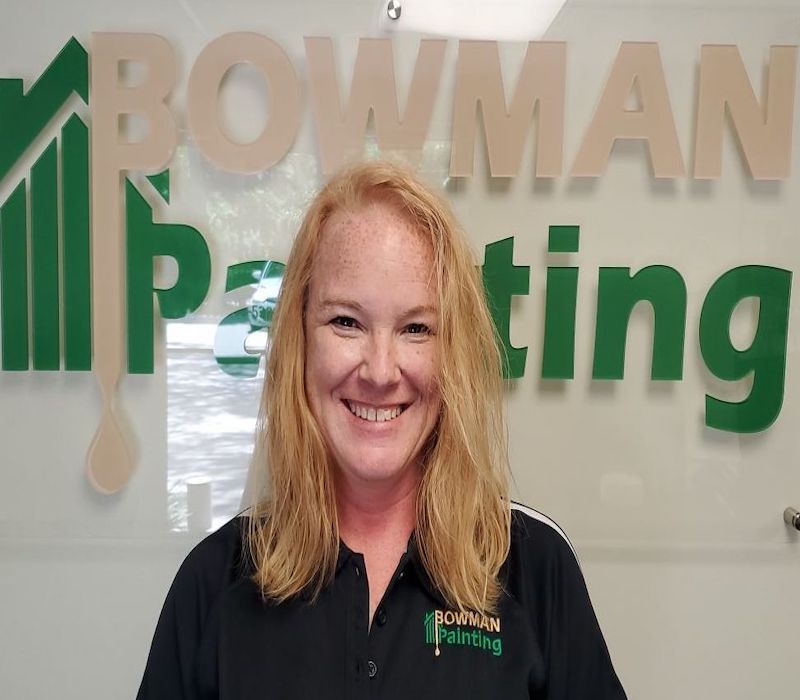 Melissa joins Bowman Painting with 20 years of bookkeeping experience as a former business owner. Originally from North Carolina, she moved to Florida 16 years ago with her two sons and mom. She has been married for 4 years and loves her rescue dog. Outside of work she is very involved with her church and family.
Close

Josh comes to Bowman Painting to assist with office administration. He grew up in Ft. Pierce, FL and relocated to Ormond Beach with his father’s career change. Outside of work, he is a continuous reader and enjoys exercise, nutrition, hiking, and politics. He and his lovely wife, Sierra, live in Ormond Beach.

Bailey Hoops is a Parson Jack Russell Terrier. She is an avid hunter of lizards, frogs, moles, and mole crickets. Her two favorite activities, outside of hunting, include napping and begging for food. She helps maintain crumb-free floors at the office. She will turn ten years old Thanksgiving of 2022.

Sebastian is a Hunt Terrier, the European Jack Russell. Jealous to a fault, he often steals the spoils of Bailey’s hunting escapades, will hip-check her to get extra attention at the office, and race to be first. His two favorite activities are mischief and greeting new visitors to the office. With a lot of puppy left in his personality, he will be seven in the summer of 2023.

Get a FREE Estimate

Our detailed estimates will leave you with the confidence of clearly knowing the true cost of a professional job. Save the hassle of painters bidding too low (cutting corners and performing poor workmanship), and too high (charging more than the painting job is worth).